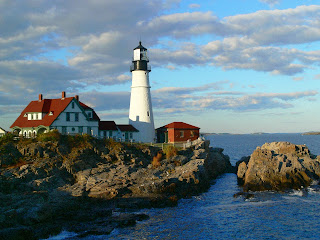 State nicknames are funny things. Although these nicknames may seem a little modern or forced, many of the nicknames have been around for hundreds of years. This is particularly true for New England states such as Maine.

Why is Maine referred to as the "Pine Tree State"? It is estimated that Maine has over 17 million acres of forests. Pines have been through all of recorded history, the most predominant tree in Maine. 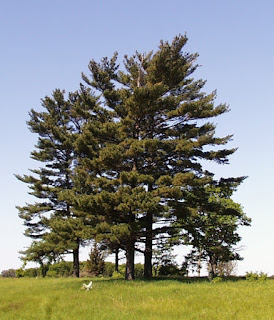 The Eastern White Pine was adopted as the Maine state tree in 1945. The White Pine can be found as far east as Newfoundland, as far West as Manitoba and as far south as Georgia. It is also known to the Native American Haudenosaunee as the "Tree of Peace".

The White Pine has also played an important role in Maine history. The tree was common, easy to cut, and produced mostly knot-free boards. The White Pine was therefore useful in the construction of buildings and ships. Sailing and lumbering continue to be important parts of Maine culture today.

For more information about the "Pine Tree State" plate, check out the link here.

Posted by Brittany PG at 6:34 PM No comments:

Disneyland grew a ton during the 1960's. Many iconic rides and lands were introduced to the theme park in '60's. 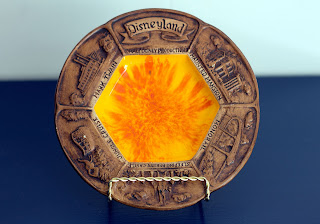 New Orleans' Square started construction in 1961. Walt Disney realized that New Orleans would be the perfect companion to Frontierland and would be a great theme for new ride ideas. These new attractions included the Haunted Mansions, the Thieves' Marketplace, and a pirate wax museum.

In 1964 however, Disney became distracted by the World Fair. He created "It's A Small World", Great Moments with Mr. Lincoln, the Primeval World Exhibit, and the Carousel of Progress. All of these attractions were moved to Disneyland once the World Fair was over.


The World Fair resulted in more than just a few finished attractions. During the fair, Disney Imagineers became more adept at combining sound, motion, and 3-D characters. The still and silent pirate wax museum became the moving and singing Pirates of the Caribbean. The wax museum was moved from the New Orleans Square Basement into a larger, connected building. Today the New Orleans building hosts the Blue Bayou restaurant, Club 33, and a cast member cafeteria.

The plate above was likely released in 1969, the same year the Haunted Mansion attraction opened. This plate has many attractions that continue to remain popular in Disneyland today. To learn more about this product please check out my Etsy shop, East West Trade Route.

Posted by Brittany PG at 8:07 AM No comments:

What was Hawaii like in the 1980's? What would the previous owner of this plate had seen and experienced when they visited this stunning paradise? 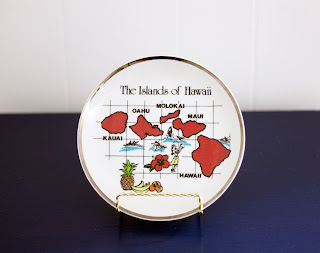 Hawaii had actually experienced their first drop in annual visits since 1949. The islands, however saw a huge increase in the number of permanent residents. The population grew by 25% in the 1980's. It seemed that more people were moving to the islands, than visiting them. The average home in the 1980's cost $150,000 USD. Today the average price is almost $600,000.


In the 1980's native and adopted Hawaiians really made an effort to preserve the culture and nature of their state. In the 1981 court case Palila v. Hawaii Department of Land and Natural Resources, Hawaiins saved of the Palila and the Māmane-Naio ecosystem of Mauna Kea. The Hawaiian language was restored in the Department of Education in 1987. In 1988, voters saved Sandy Beach from condo development.

Hawaii was in flux in the 1980's. On one hand, Hawaii witnessed massive commercial development has it became more connected to the mainland. On the other hand, Hawaiians fought to preserve their land and culture. To see this plate yourself, please check out my Etsy store East West Trade Route.
Posted by Brittany PG at 5:49 AM No comments:

Music City, USA has seem to experienced nothing but growth since the 1960's. What was Nashville like in the 1980's, the decade in which this plate was produced and sold? In particular, what was country music like? 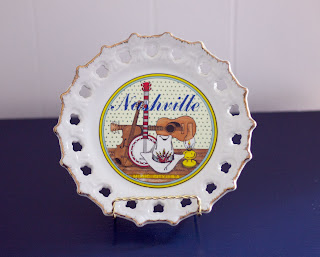 On the plate you can see a guitar, banjo, and a fiddle. Country music in the 1980's was really becoming more mainstream. Country stars such as Willie Nelson and Dolly Parton had successfully crossed over into pop.

Other musicians wanted to get back to the basics of country music. These artists included Reba McEntire, George Straight, and Alan Jackson. Still others begin to combine country music with stadium rock. Garth Brooks' "Friends in Low Places" and Brooks and Dunn's "Boot Scootin' Boogie" were huge stadium-pleasing hits.


Nashville continues to be at the heart of country music. It is the home to the Grand Ole Opry, the Country Music Hall of Fame, and several major record companies.

Whoever visited Nashville in the 1980's would have been surrounded by all of the music in the air. To check out this plate for yourself, visit my Etsy shop, East West Trade Route.
Posted by Brittany PG at 6:42 AM 2 comments: 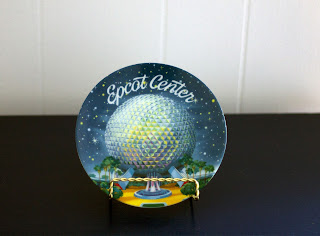 Whoever once owned this souvenir travel plate, visited Epcot in 1982, the park's opening year. They visited a park that was incredibly unique and could only have been a product of Walt Disney's imagination.

Walt Disney originally wanted create a utopian city of the future that people would actually live in. He said, "EPCOT will take its cue from the new ideas and new technologies that are now emerging from the creative centers of American industry. It will be a community of tomorrow that will never be completed, but will always be introducing, and testing, and demonstrating new materials and new systems."
Disney died however before the completion of the park. His engineers did not feel comfortable opening a park where people lived without Disney's guidance and they disagreed over the park's purpose. Some Imagineers wanted it to represent the cutting edge of technology, while others wanted it to showcase international cultures and customs. Eventually the park became both- a celebration of technology and globalism.

On Epcot's opening day, dancers and band members performed We've Just Begun to Dream. Performing groups representing countries from all over the world performed in World Showcase. Water was gathered from major rivers across the globe and emptied into the park's fountain of nations ceremonial containers to mark the opening.

Visitors would have been mesmerized by attractions such as The World of Motion, CommuniCore, Universe of Energy, and The Land. The only original attraction that remains in the park today is The Land. Visitors would have also feasted on foods from Mexico, China, Germany, Japan, France, the United Kingdom, Canada, and the United States. Morocco and Norway were later editions.

I hope that whoever once owned this plate had the trip of a lifetime. This commemorative plate is available in my Etsy shop East West Trade Route.

Posted by Brittany PG at 7:53 AM No comments:

Brittany PG
What is a native Californian doing in Maine? Attending graduate school for history and posting about her many travel adventures!